Are Ceiling Fans Supposed to Wobble? 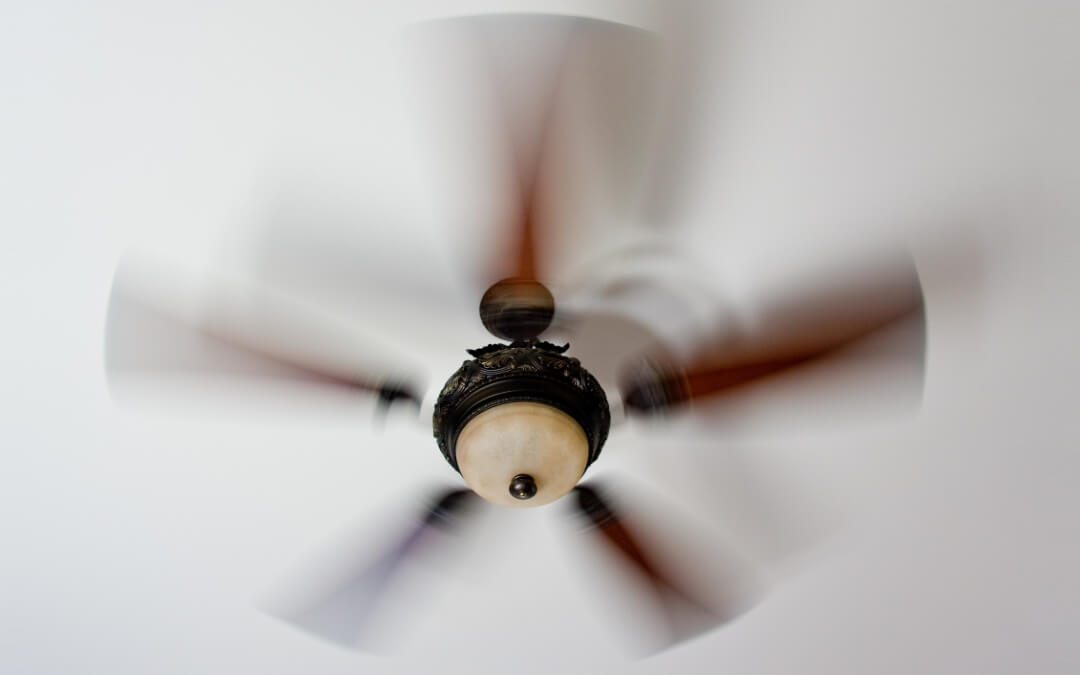 Ceiling fans are a great way to cool the air in your home in these hot Arizona summers. They’re relatively inexpensive and you can install them yourself. They come in many designs, so it’s easy to find something to fit each of your rooms individually. Sometimes, you’ll notice you ceiling fan wobbling. Are ceiling fans supposed to wobble? If so, how much can they wobble and still be safe?

Well, if you think about it… a ceiling fan is a spinning motor with blades attached (like a propeller) that hangs from a rod that’s mounted to your ceiling. It’s kind of surprising if they don’t wobble at least a little bit. But sometimes they wobble a lot.

A slight wobble of about 1/8” while running on high is normal. Anything more than that can damage the fan and, depending on the cause of the wobble, it can actually be dangerous.

Let’s look at some of the reasons a ceiling fan can wobble and see what to do about it. Fortunately, most of the causes are minor and the fixes are simple and inexpensive.

With the ceiling fan off, see if you can gently shake, or rock, the fan. It should not be able to move in any direction except for the fan blades spinning. If you can move the fan back and forth, then most likely the problem is the mount. If the mount is loose, don’t use the fan. It could come loose from the mount and damage something, or someone, in the room.

The ceiling fan must be mounted to a box that’s rated for fans. These mounts are usually labeled as fan-rated. Fans should not be mounted in electrical boxes. They’re not rated for the load and motion of ceiling fans. The box should be mounted with either a fan brace or on a 2×4 with lag screws.

See if the mount is loose. You shouldn’t be able to move it. If it’s loose and can’t be tightened, or if it’s the wrong type of box, then you’ll need to replace it.

Check the Bolts for the Blades

Make sure all of the bolts holding the blades are present and tight. Make sure they’re the same bolts. Bolts of different sizes can weigh enough different to get the blades out of balance with each other. It only takes .5 grams to throw a blade out of balance.

Also, check for dust on top of the blades. This can also cause the blades to be imbalanced. Any common household cleaner should be fine unless the instructions that came with your ceiling fan specify otherwise.

They should be the same distance apart from each other be the same length. If the mounting holes become enlarged, or if the blades have adjustments built in, they can become out of alignment with each other. Loosen the bolts for the blades that are out of alignment, align them according to the correct measurement, and carefully tighten the bolts. This actually isn’t likely to be the cause, but if nothing else works then it’s worth checking.

Wooden blades contain water, which can evaporate differently from one blade to another over time. This can leave the blades at different weights and cause the blades to become unbalanced. Blades are weighted to within 1 gram of each other, so it doesn’t take much to get them unbalanced.

You can balance the blades using balancing kits with clips and several sizes of adhesive-backed weights, coins, washers, or other small items that can be used to add weight in small increments. Tape a small coin or washer, or attach a clothespin or the balancing clip from a balancing kit, to the middle of one blade.

Turn the fan on to check for wobble. Remove the weight and repeat the process for each blade until the amount of wobble reduces. Move the weight up or down the blade and check the wobble again. Add more weight if needed until the blades are balanced. If you’re using a balancing clip, place the weight with adhesive backing in the center of the blade next to the clip, and then remove the clip.

Evaporating water can also make them warp or twist. Look down the blade and see if they’re all shaped the same. You might need to remove them and compare them to each other to get a better look at the blades. If the blades are warped or twisted they’ll need to be replaced.

It’s normal for a ceiling fan to have a little bit of wobble, but a lot of wobble can damage the fan and possibly something else in the room. They can also be loud. Fortunately, it’s not too difficult to fix. A non-wobbly ceiling fan is a happy ceiling fan. Happy ceiling fans work better, quieter, safer, and longer.